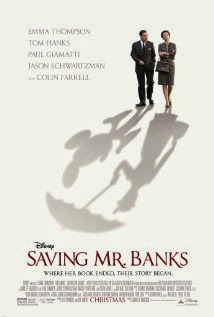 "Saving Mr. Banks" follows the tumultuous week where Walt Disney, played by Tom Hanks, tries to convince "Mary Poppins" author P. L. Travers, brought to life by Emma Thompson, to sign over the rights to the story in order for the studio to make it into a film.

Now, we all know Disney succeeded because, well, we've all seen "Mary Poppins." But the trek from point A to point B is very interesting, and incredibly touching.

I read the books when I was a teenager and was completely disappointed in them. They were nothing like the movie, after all. But after seeing "Banks," I can see how Travers saw the characters, and the books make a lot more sense to me now.

Hanks plays a sometimes convincing Disney, but when it boils down to it, I don't know how anyone other that Walt himself could really take on that role. The real scene-stealer was Thompson.

Now, I didn't go into the theater with any real knowledge of P. L. Travers, so there wasn't a lot compare Thompson's portrayal to. I do know, however, that Thompson managed to tug a couple of tears from me on a couple of occasions.

This was the perfect movie to see on Christmas day. It was enlightening and heartbreaking all at the same time.

Plus, it made me want to go to Disneyland.